Note: if you see funny symbols, your browser may not be standards compliant, or you may not have the proper fonts. To get these fonts, click here.

Just as one must learn Aramaic, Greek, and Hebrew to be a worthwhile biblical scholar, one must have a certain amount of math at one's disposal to get a grip on most modern sciences. As such, today we will be discussing some of the math skills that you must use.

Perhaps the most basic of these skills is algebra. Now before you run screaming understand that will will be using only very basic algebra as this class is very general (you're not trying to become an engineer, are you?) So... to get to business, you need the following skills:

Substitution
Substitution is at the very root of algebra - the idea of letting a letter represent a quantity. For example, consider a circle. The circumference or perimeter length is given by the algebraic formula:


C = 2 \pi r
The variable \pi = 3.14159 is a constant that (by definition) relates the circumference of a circle to its radius. So if you were given that r = 10 m, you could substitute this value into the formula above and determine the circumference, C.

This is, of course, a very simple formula. A more advanced formula you might encounter is Newton's Law of Gravitation, given by:


F = {{Gm_1 m_2} \over {r^2}}
To make use of this formula, you would have to know what each symbol represented. This key is given in the table below. Any time you see a formula, you should try to understand what each symbol, or letter represents.
If you were told to calculate the Gravitational Force, F, you would need to know the values of every other symbol. (Note that symbols will more commonly be referred to as variables.) Let's do this exercise. Given:
Note that all variables not only have a value, but they also have units. In physics, the units (or dimensions) are equally important as the values of the numbers. Let's do the calculation by substitution:
F = {{6.67 \times 10^{-11} Nm^2/kg^2 100 kg 200 kg} \over {{(10 m)}^2}}
F = 1.33 \times 10^{-8} N
Following the ideas of our last lecture, we need to know if this number is big or small, or even reasonable for that matter. As we have not covered the subject yet, you have no context for such an estimation. However, we do know that this number is very much smaller than unity (1).

Symbolic Manipulation
This is a bit weird for most people who don't do math on a regular basis. However, with regular exercise of your math muscles, you will find that this gets easier and easier. The first of these skills is what I will call three-way-manipulation. Very often in this class you will see formula of the form: 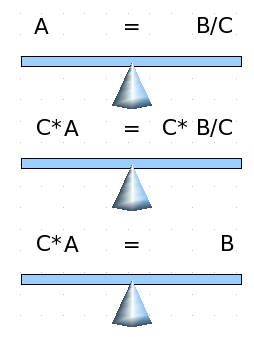 So we will multiply both sides of the equation by C.

{B \over A} = {{CA} \over A}
or
C = {B \over A}
If you have a group of variables, this idea still applies. Let's use Newton's equation for Gravitation. What if we need to solve for r (having been given everything else)?

r = \sqrt{r^2} = \sqrt{{G m_1 m_2} \over F}
You will notice that we have done most of this using symbols instead of using actual numbers. There is a reason for this. What if I were to ask you to solve for r in three cases, where in one case F=100N, m1=10 kg and m2=20kg, in another case F=1000N, m1=100 kg and m2=200kg, and in the last case F=10N, m1=100 kg and m2=50kg? If you plugged the numbers into the original equation and then manipulated it, you'd have to do the manipulation three times (too much work) before you could get the answers. However, if you do it algebraically, you can do the manipulation just once, save yourself some work, and plug in the values into the same template quite easily. We will do many more examples of this as class progresses.

Adding Fractions
The next skill you will need relates to dealing with fractions. Before you panic, realize that the most common math deficit we see as educators is a problem in this area. Let's do an example of how NOT to add fractions to illustrate my point.

Pretend that I am your banker. You get to choose the rules of math by which I do my banking. Now this could be quite lucrative to you, if you choose your rules correctly. So.. on the first day, you deposit 1/2 a million dollars. On the second day you deposit 1/4 of a million dollars. On the third day, you want it all back. In total you have given me $750,000. (Show this yourself). I ask you "What rules should I use in returning your money?" You say (incorrectly), that I should take the fractions, and add the numerators and add the denominators. "Very well," say I (with a bit of a grin at the amount of money I get to keep). Here's what it looks like:

Were we to do this problem correctly, we would find a common denominator before adding. That is, we need to multiply the term on the left (1/2) by (4/4 = 1) and the term on the right (1/4) by (2/2 = 1). Note that multiplying anything by 1 gives us that number back. We aren't changing the balance of the equation in the least.

Algebraically, this result can be stated as:

Trigonometric Functions
Trigonometry tends to be a subject that is taken reluctantly by students and then quickly forgotten. I would like to present to you the essence of trig here in a relatively painless way. The entire idea behind trigonometry is to relate the interior angles of a triangle to the triangle's dimensions. Consider the right triangle formed by A (the hypoteneuse), Ax (the base or adjacent) and Ay (the height or opposite).

The three functions sin, cos, and tan are ratios of the lengths of sides of the triangle:

sin \theta = {A_y \over A}
cos \theta = {A_x \over A}
tan \theta = {A_y \over A_x}
Thus, if one is given the magnitude of the vector A and the angle it makes, it is possible to determine the lengths of its x and y components as indicated above. This is one of the major reasons for using trigonometry. The other is to find angles using known dimensions. So if you know any two out of three sides of a right triangle, you can find the remaining side using the Pythagorean Theorem (see below), and the angle \theta using the appropriate trigonometric function from above.

Vector Addition
First, a word about what vectors are is in order. A vector is a number with a direction. For example, if I were to tell you to go due north for 25 paces, I would have defined a vector whose magnitude is 25 paces, and whose direction is north. If I said to run east at 10 mph, this would be a vector whose magnitude is 10 mph, and whose direction is east.

On the other hand, a mass of 10 kg has no direction associated with it. It is a scalar which is to say, just a number (with associated units). Now if we consider the action of gravity upon this mass, we know that gravity is acting downwards. The action of gravity is dependent on a force which is a vector. The magnitude of Gravitational force is proportional to the mass of the object, and the direction, in the most basic sense, is downwards. Another example of a scalar is your age. Your age is just a number of years and does not have a direction (in the classical sense). A volume of water (a liter, for example) is also a scalar. It is a number, with units that has no direction. It is important to understand the distinction between a vector and a scalar.

Now we come to the question, why on Earth would we want to add vectors? Let me give you an example.

Let's say you have a treasure map that says to go 25 paces due east and then 25 paces due north. You might be interested in how many paces you need to go in total and what the net direction is. If you walk along A (25 paces east) and then along B (25 paces north), you know that you have walked 50 paces total. But you may not be certain of your net direction. What do I mean by net? I mean that if you wanted to take the shortest path from the starting point to the ending point, (C), what one heading would you choose to take? In this case, it's easy, you can answer that you go north-east. But if you go directly north-east, how many paces do you go? That is the magnitude that we are looking for when we speak of a resultant. When we add \vec A + \vec B we get \vec C. You will notice that the diagram resembles a triangle. Therefore, to get the length of C, we can use the Pythagorean Theorem:

One adds vectors head to tail as illustrated here. The head of a vector is the "arrow-head" whereas the tail is the other end. The negative of a vector is simply the reverse of the original (compare B to -B).

There are a couple of triangles one should memorize as they will show up quite often in problems:

Other Math
Here I will outsource some of the ideas to Wikipedia.org. You should know the following other math: (Focus on the algebraic rules given and do not worry about the calculus) Examples in class.